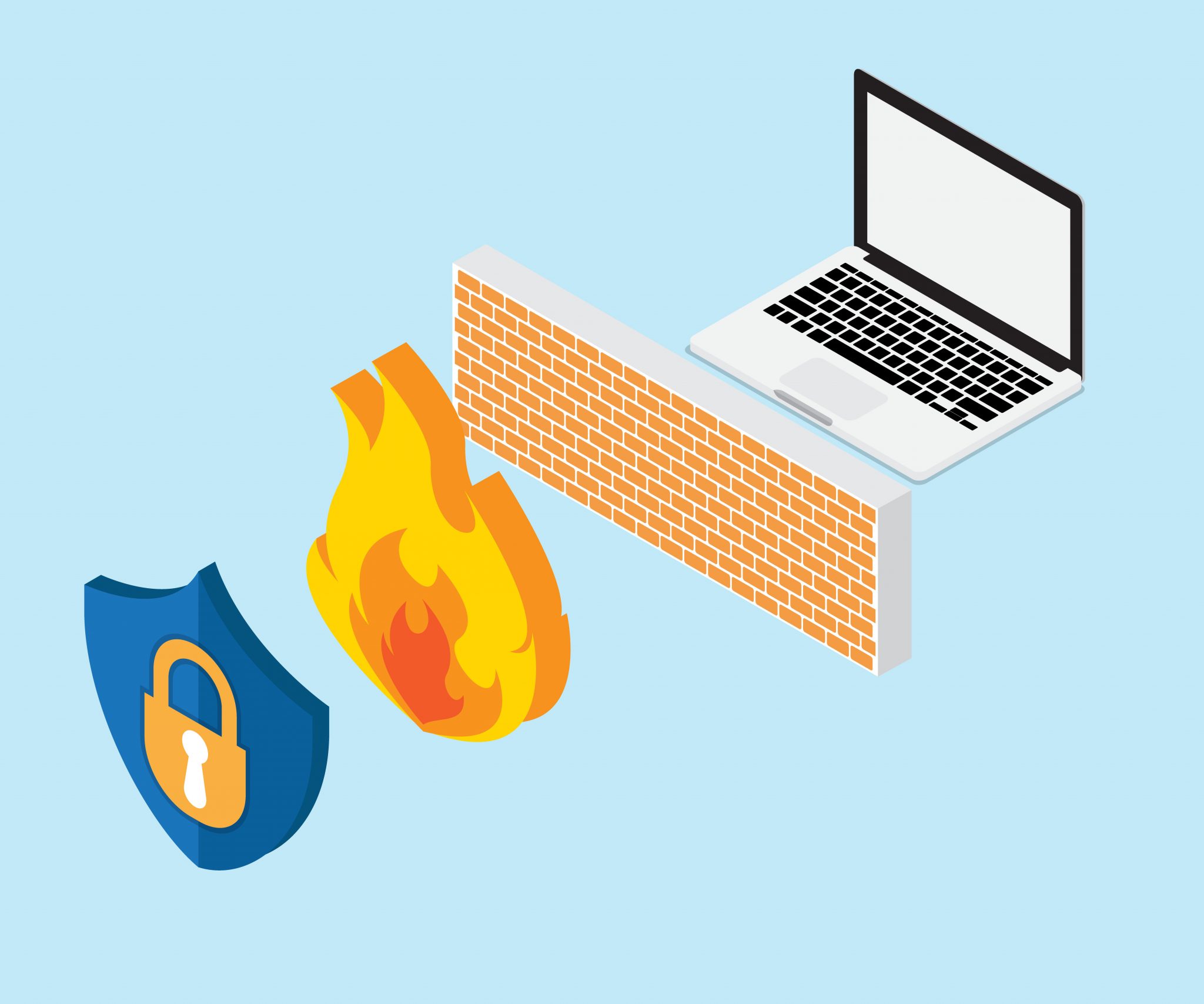 A firewall is a network security device that monitors incoming and outgoing network traffic and permits or blocks data packets based on a set of security rules. Its purpose is to establish a barrier between your internal network and incoming traffic from external sources (such as the internet) in order to block malicious traffic like viruses and hackers.

How Does a Firewall Work?

Firewalls carefully analyze incoming traffic based on pre-established rules and filter traffic coming from unsecured or suspicious sources to prevent attacks. Firewalls guard traffic at a computer’s entry point, called ports, which is where information is exchanged with external devices. For example, “Source address 172.18.1.1 is allowed to reach destination 172.18.2.1 over port 22.”

Think of IP addresses as houses, and port numbers as rooms within the house. Only trusted people (source addresses) are allowed to enter the house (destination address) at all—then it’s further filtered so that people within the house are only allowed to access certain rooms (destination ports), depending on if they’re the owner, a child, or a guest. The owner is allowed to any room (any port), while children and guests are allowed into a certain set of rooms (specific ports).

Firewalls can either be software or hardware, though it’s best to have both. A software firewall is a program installed on each computer and regulates traffic through port numbers and applications, while a physical firewall is a piece of equipment installed between your network and gateway.

Packet-filtering firewalls, the most common type of firewall, examine packets and prohibit them from passing through if they don’t match an established security rule set. This type of firewall checks the packet’s source and destination IP addresses. If packets match those of an “allowed” rule on the firewall, then it is trusted to enter the network.

Packet-filtering firewalls are divided into two categories: stateful and stateless. Stateless firewalls examine packets independently of one another and lack context, making them easy targets for hackers. In contrast, stateful firewalls remember information about previously passed packets and are considered much more secure.

While packet-filtering firewalls can be effective, they ultimately provide very basic protection and can be very limited—for example, they can’t determine if the contents of the request that’s being sent will adversely affect the application it’s reaching. If a malicious request that was allowed from a trusted source address would result in, say, the deletion of a database, the firewall would have no way of knowing that. Next-generation firewalls and proxy firewalls are more equipped to detect such threats.

Proxy firewalls filter network traffic at the application level. Unlike basic firewalls, the proxy acts an intermediary between two end systems. The client must send a request to the firewall, where it is then evaluated against a set of security rules and then permitted or blocked. Most notably, proxy firewalls monitor traffic for layer 7 protocols such as HTTP and FTP, and use both stateful and deep packet inspection to detect malicious traffic.

Network address translation (NAT) firewalls allow multiple devices with independent network addresses to connect to the internet using a single IP address, keeping individual IP addresses hidden. As a result, attackers scanning a network for IP addresses can’t capture specific details, providing greater security against attacks. NAT firewalls are similar to proxy firewalls in that they act as an intermediary between a group of computers and outside traffic.

Stateful multilayer inspection (SMLI) firewalls filter packets at the network, transport, and application layers, comparing them against known trusted packets. Like NGFW firewalls, SMLI also examine the entire packet and only allow them to pass if they pass each layer individually. These firewalls examine packets to determine the state of the communication (thus the name) to ensure all initiated communication is only taking place with trusted sources.

Firewalls are customizable. This means that you can add or remove filters based on several conditions. Some of these are:

IP addresses – Each machine on the Internet is assigned a unique address called an IP address. IP addresses are 32-bit numbers, normally expressed as four “octets” in a “dotted decimal number.” A typical IP address looks like this: 216.27.61.137. For example, if a certain IP address outside the company is reading too many files from a server, the firewall can block all traffic to or from that IP address.

Domain names – Because it is hard to remember the string of numbers that make up an IP address, and because IP addresses sometimes need to change, all servers on the Internet also have human-readable names, called domain names. For example, it is easier for most of us to remember www.howstuffworks.com than it is to remember 216.27.61.137. A company might block all access to certain domain names, or allow access only to specific domain names. Protocols – The protocol is the pre-defined way that someone who wants to use a service talks with that service. The “someone” could be a person, but more often it is a computer program like a Web browser. Protocols are often text, and simply describe how the client and server will have their conversation. The http in the Web’s protocol. Some common protocols that you can set firewall filters for include:

A company might set up only one or two machines to handle a specific protocol and ban that protocol on all other machines.

Specific words and phrases – This can be anything. The firewall will sniff (search through) each packet of information for an exact match of the text listed in the filter. For example, you could instruct the firewall to block any packet with the word “X-rated” in it. The key here is that it has to be an exact match. The “X-rated” filter would not catch “X rated” (no hyphen). But you can include as many words, phrases and variations of them as you need.

Some operating systems come with a firewall built in. Otherwise, a software firewall can be installed on the computer in your home that has an Internet connection. This computer is considered a gateway because it provides the only point of access between your home network and the Internet.

With a hardware firewall, the firewall unit itself is normally the gateway. A good example is the Linksys Cable/DSL router. It has a built-in Ethernet card and hub. Computers in your home network connect to the router, which in turn is connected to either a cable or DSL modem. You configure the router via a Web-based interface that you reach through the browser on your computer. You can then set any filters or additional information.

Hardware firewalls are incredibly secure and not very expensive. Home versions that include a router, firewall and Ethernet hub for broadband connections can be found for well under $100.