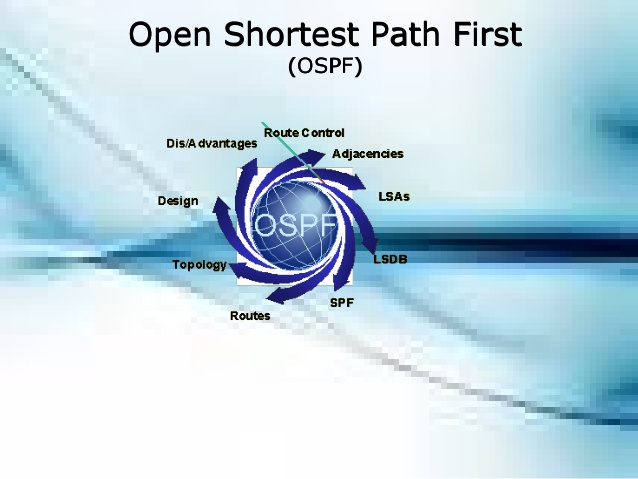 OSPF (Open Shortest Path First) is a link state routing protocol. Because it is an open standard, it is implemented by a variety of network vendors. OSPF will run on most routers that doesn’t necessarily have to be Cisco routers (unlike EIGRP which can be run only on Cisco routers).

Here are the most important features of OSPF:

Routers running OSPF have to establish neighbor relationships before exchanging routes. Because OSPF is a link state routing protocol, neighbors don’t exchange routing tables. Instead, they exchange information about network topology. Each OSFP router then runs SFP algorithm to calculate the best routes and adds those to the routing table. Because each router knows the entire topology of a network, the chance for a routing loop to occur is minimal.

Topology table – stores the topology structure of a network

OSPF routers need to establish a neighbor relationship before exchanging routing updates. Neighbors are dynamically discovered by sending Hello packets out each OSPF-enabled interface on a router. Hello packets are sent to the multicast IP address of 224.0.0.5.

The process is explained in the following figure:

In the example above, you can see that the router-id of R2 is  2.2.2.2. Each OSPF router is assigned a router ID. A router ID is determined by using one of the following:

The following fields in the Hello packets must be the same on both routers in order for routers to become neighbors:

Before establishing a neighbor relationship, OSPF routers need to go through several state changes. These states are explained below.

1. Init state – a router has received a Hello message from the other OSFP router
2. 2-way state – the neighbor has received the Hello message and replied with a Hello message of his own
3. Exstart state – beginning of the LSDB exchange between both routers. Routers are starting to exchange link state information.
4. Exchange state – DBD (Database Descriptor) packets are exchanged. DBDs contain LSAs headers. Routers will use this information to see what LSAs need to be exchanged.
5. Loading state – one neighbor sends LSRs (Link State Requests) for every network it doesn’t know about. The other neighbor replies with the LSUs (Link State Updates) which contain information about requested networks. After all the requested information have been received, other neighbor goes through the same process
6. Full state – both routers have the synchronized database and are fully adjacent with each other.

OSPF uses the concept of areas. An area is a logical grouping of contiguous networks and routers. All routers in the same area have the same topology table, but they don’t know about routers in the other areas. The main benefits of creating areas is that the size of the topology and the routing table on a router is reduced, less time is required to run the SFP algorithm and routing updates are also reduced.

Each area in the OSPF network has to connect to the backbone area (area 0). All router inside an area must have the same area ID to become OSPF neighbors. A router that has interfaces in more than one area (area 0 and area 1, for example) is called Area Border Router (ABR). A router that connects an OSPF network to other routing domains (EIGRP network, for example) is called Autonomous System Border Router (ASBR).NOTE
In OSPF, manual route summarization is possible only on ABRs and ASBRs.

To better understand the concept of areas, consider the following example.

All routers are running OSPF. Routers R1 and R2 are inside the backbone area (area 0). R3 is an ABR, because it has interfaces in two areas, namely area 0 and area 1. Router R4 and R5 are inside area 1. Router R6 is an ASBR, because it connects OSFP network to another routing domain (an EIGRP domain in this case). If the R1’s directly connected subnet fails, router R1 sends the routing update only to R2 and R3, because all routing updates all localized inside the area.NOTE
The role of an ABR is to advertise address summaries to neighboring areas. The role of an ASBR is to connect an OSPF routing domain to another external network (e.g. Internet, EIGRP network…).

The LSAs (Link-State Advertisements) are used by OSPF routers to exchange topology information. Each LSA contains  routing and toplogy information to describe a part of an OSPF network. When two neighbors decide to exchange routes, they send each other a list of all LSAa in their respective topology database. Each router then checks its topology database and  sends a Link State Request (LSR) message requesting all LSAs not found in its topology table. Other router responds with the Link State Update (LSU) that contains all LSAs requested by the other neighbor.

The concept is explained in the following example:

OSPF basic configuration is very simple. Just like with other routing protocols covered so far (RIP, EIGRP) first you need to enable OSPF on a router. This is done by using the router ospf PROCESS-ID global configuration command. Next, you need to define on which interfaces OSPF will run and what networks will be advertised. This is done by using the network IP_ADDRESS WILDCARD_MASK AREA_ID command from the ospf configuration mode.NOTE
The OSPF process number doesn’t have to be the same on all routers in order to establish a neighbor relationship, but the Area ID has to be the same on all neighboring routers in order for routers to become neighbors.

Let’s get started with some basic OSPF configuration. We will use the following network topology:

The network commands entered on both routers include subnets directly connected to both routers. We can verify that the routers have become neighbors by typing the show ip ospf neighbors command on either router:

To verify if the routing updated were exchanged, we can use the show ip route command. All routes marked with the character O are OSPF routes. For example, here is the output of the command on R1:

Although basic OSPF configuration can be very simple, OSPF provides many extra features that can get really complex. In this example, we will configure multiarea OSPF network and some other OSPF features.

In this example we have two OSPF areas – area 0 and area 1. As you can see from the network topology depicted above, routers R1 and R3 are in the area 0 and area 1, respectively. Router 2 connects to both areas, which makes him an ABR (Area Border Router). Our goal is to advertise the subnets directly connected to R1 and R3. To do that, the following configuration on R1 will be used:

NOTE
We have used the router-id 1.1.1.1 command to manually specify the router ID of this router. OSPF process will use that RID (router-id) when communicating with other OSPF neighbors.

Because R1 connects only to R2, we only need to establish a neighbor relationship with R2 and advertise directly connected subnet into OSPF.

Configuration of R3 looks similar, but with one difference, namely area number. R3 is in the area 1.

Now R2 should have neighbor relationship with both R1 and R3. We can verify that by using the show ip ospf neighbor command:

To verify if directly connected subnets are really advertised into the different area, we can use the show ip route ospf command on both R1 and R3:

Characters IA in front of the routes indicate that these routes reside in different areas.