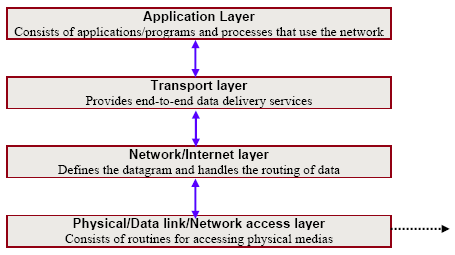 TCP/IP, or the Transmission Control Protocol/Internet Protocol, is a suite of communication protocols used to interconnect network devices on the internet. TCP/IP can also be used as a communications protocol in a private network (an intranet or an extranet).

Why we need a new Model when we have OSI Model?

► Although the OSI reference model is universally recognized, the historical and technical open standard of the Internet is Transmission Control Protocol / Internet Protocol (TCP/IP).

► The TCP/IP reference model and the TCP/IP protocol stack make data communication possible between any two computers, anywhere in the world, at nearly the speed of light.

► The U.S. Department of Defense (DoD) created the TCP/IP reference model because it wanted a network that could survive any conditions, even a nuclear war.

All Internet-based applications and their data, whether it is a web browser downloading a web page, Microsoft Outlook sending an e-mail, a file, an instant message, a Skype video or voice call; the data is chopped into data segments and encapsulated in Transport Layer Protocol Data Units or PDU’s (TCP or UDP segments). The Transport Layer PDU’s are then encapsulated in Internet Layer’s Internet Protocol packets. The Internet Protocol packets are then chopped into frames at the Network Access layer and transmitted across the physial media (copper wires, fiber optic cables or the air) to the next station in the network.

The OSI Model uses seven layers, and differs quite a bit from the TCP/IP model. The TCP/IP model does a better job of representing how TCP/IP works in a network, but the OSI Model is still the networking model most technical people refer to during troubleshooting or network architecture discussions.

We’re going to teach you the TCP/IP model from the top down beginning with the Application Layer.

The Internet Layer communicates with the Transport Layer when receiving and sends data to the Network Access Layer when transmitting.

The Application Layer provides the user with the interface to communication. This could be your web browser, e-mail client (Outlook, Eudora or Thunderbird), or a file transfer client.

The Application Layer is where your web browser, a telnet, ftp, e-mail or other client application runs. Basically, any application that rides on top of TCP and/or UDP that uses a pair of virtual network sockets and a pair of IP addresses.

The Application Layer sends to, and receives data from, the Transport Layer.