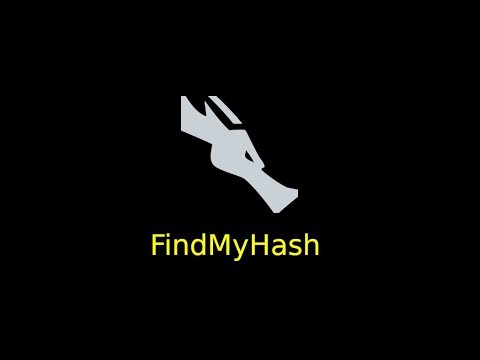 Findmyhash is a free open-source tool that helps to crack passwords using free online services. Findmyhash helps you to decipher some common hashes speedily, besides that, it is elementary to use.  Be sure to only install python in your machine.

Have you ever find an interesting hash on Internet or in some old database that used to be not so secure ? Now, with awesome and broad web services that you can find on the internet, you may be able to know what that hash used to look before it were hashed by some hasher algorithm like MD5, SHA1 or GOST.

In Kali Linux, you may boost the process of searching on internet for the original string of your hash using the findmyhash tool that will do the job for you. findmyhash is an useful python script used to crack a lot of hashes using web services.

How does findmyhash works ?

findmyhash is an awesome command line utility that cracks hashes through different online services. As you may know, functions like MD5 aren’t plainly encryption tools (though it may be used as part of some encryption algorithms) but a one way hash function, that means that you can’t reverse it with certainty.

findmyhash is included on Kali Linux and can be used quickly from the command line.

The usage of findmyhash is pretty simple, it has 1 required argument (the name of the hasher function e.g MD5, SHA1 etc) and 3 options:

The following hash functions are supported by findmyhash:

The most basic example, has the following structure:

So for example, if you want to find the text of the MD5 hash 5eb63bbbe01eeed093cb22bb8f5acdc3 (whose original text was “hello world”), then you would execute the following command on a new terminal:

Whose output will be:

The result of the previous command line is as follows.